Chisato has white hair and purple eyes. He's always seen wearing white clothes. When he was in college, his hair was shorter and he wore glasses. After beginning to work for The Organization, he stopped wearing glasses. Chisato always has a stoic or emotionless facial expression.

Chisato is a serious, cold and ruthless person whose intelligence never made him feel lonely, that is until Chie died, and he felt loneliness for the first time in his life. After becoming the director of Vingulf, he began seeing the B-rank witches as nothing more than insects or failed products, rather then blaming himself and the other scientists for not making them stronger. He is shown to be violent when provoked, easily beating Ryouta Murakami, Neko Kuroha and even Mako Fujisaki without showing hesitation. The final words of Chie made him remember that he was human, and his sacrifice for Mako is proof that he was still capable of feeling empathy. His final words towards Valkyria were that he hated humans because they always followed their emotions, but that he wanted to fulfill the last request of Chie which was never hurt anyone else.

Chisato is the director at the research institute whose job is the supervision of "witches" and the management of "Sorcerian." He deploys people to capture and retake witches A-rank and above when they escape. Ichijiku has also once spoken with Kogorou Hashiratani once in the animation, and Kogorou seems to have studied his research paper about protease which could be the source of the melting.

They went to the same college and Kogorou looks up upon him where he comments that he's a better genius than himself.

Ichijiku had his first encounter with Mako during an experiment which resulted in her melting away, but he decided to save her, despite the risk of dying by getting exposed to radiation, however with the intention of using her to achieve his own goal. He didn't not harbor any romantic feelings for Mako like she did as he only sees her as a mere tool at first. His perspective changed when Rena Ichijiku (Chisato's younger sister) begged him not to hurt anybody anymore in her final words and he then sacrificed his own life by protecting Mako from Hexenjagd's attacks by using his body as a shield.

Ichijiku works for The Organization.

Ichijiku had a younger sister named Rena Ichijiku who died and later Ichijiku implanted a "harnessed" into Rena's body, but her personality changed. When Grane awakens from Kotori's body, whilst it was melting away, she revealed that she was Rena all along, greeting him Onii-chan, along with her final words.

He was planning to capture her along with Kotori as a sample. He immediately tells Mako to kill her when Kuroneko resisted seeing her as an eyesore. 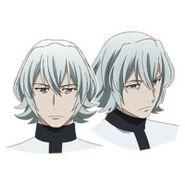 Chisato's character entry in BD material
Add a photo to this gallery
Retrieved from "https://gokukoku-no-brynhildr.fandom.com/wiki/Chisato_Ichijiku?oldid=9810"
Community content is available under CC-BY-SA unless otherwise noted.