Hatsuna Wakabayashi (若林 初菜, Wakabayashi Hatsuna?) is one of the supporting characters in Brynhildr in the Darkness. As the story goes on, she becomes one of the protagonists. She is a magician that possesses the power of regeneration.

Hatsuna has brown, short hair with a side ponytail tied up by a blue ribbon. On the left side of her face is a yellow hair clip. Her clothing consists of a sleeveless blouse with a white undershirt and a skirt. She also has dark blue eyes.

Hatsuna is a person who doesn't trust people easily, especially normal humans. She went as far as to test Ryouta and see if he's trustable, resulting in his near-death state. Her distrust to humans most likely comes from her previous friend who called Hatsuna a best friend, but runs away when she demostrated her regeneration powers after being sliced into half by Valkyria. Like any other magicians who escaped, she knows that death awaits her when she runs out of medicine. However, this philosophy changed when she met the Astronomy Club members, who managed to get a finite supply of medicine. Once Hatsuna trusts a person, especially a guy, she would go as far as asking him to be her boyfriend bluntly, as seen in Ryouta's situation.

Hatsuna is also shown to have little modesty, as she sexually molests Kana while she was paralyzed, and caressing Kotori's large breasts.

After being driven away from the observatory by Neko Kuroha, Valkyria targets Hatsuna in order to steal her medicine. While hanging out with her human friend, Valkyria shows up and she threatens to kill Hatsuna's friend if Hatsuna doesn't give Valkyria her medicine. Though Hatsuna reluctantly tells Valkyria the location of her medicine, Valkyria slashes her in half because of her arrogance. Thinking that Hatsuna is dead, her human friend panics, begging her not to die, but runs away when Hatsuna begins to regenerate, proclaiming her ability as disgusting.

Afterwards, Hatsuna searches for the Astronomy's Club observatory after hearing there were witches living in an observatory. When she arrives, she finds them all 'dead', but they reveal that they were pretending to have died from lack of death suppressants just in case Valkyria showed up again. Hatsuna suggests that she has met the other magicians, except for Kotori, at some point and that she was with them when the crash that allowed the B ranked magicians the opportunity to escape. She tells them that she was sleeping at the time and she awoke only when the other magicians had escaped, but that they had all overlooked boxes of death suppressants inside the armored trucks. She was living off of these, but loses all but ten days' worth of them to Valkyria. Thinking back to her human friend that had abandoned her upon witnessing her abilities, Hatsuna expresses surprise that the magician's had trusted Ryouta Murakami with their secret. They explain that they all trust him with their lives and that Hatsuna is bad at judging people.

Later, Hatsuna tricks Ryouta into climbing up a radio tower by pretending to be helplessly stuck at the top. She does this in order to see for herself if he is a person worth trusting. She tries to demonstrate her ability by falling off the tower, but Ryouta refuses to let her go and grabs onto her hand, resulting in both of them dangling from a broken piece of the tower. While Hatsuna pleads with him to believe that she has the ability of regeneration, Ryouta refuses to allow her to fall to save himself and helps her get back onto the tower, but the stress of this action causes the pipe to snap, sending Ryouta plummeting to his death. Hatsuna initially despairs over the fact that she had indirectly killed someone until she realizes that Kotori had used her magic to save him, at which point she is driven to tears of relief. Ryouta's action had touched her and upon reaching the ground, she bluntly asks him to be her boyfriend and steals a kiss. The tower they were on just minutes ago explodes and begins falling to the ground - Hatsuna's actions had incited Neko's jealous rage.

In Chapter 120 of the manga series Kana has a foresight of Hatsuna on a date with Masashi Takaya when she suddenly hatches eating Takaya and other bystanders. After this Happens Kana tells Murakami and they have a talk about what they should do when Hatsuna hatches, both of them couldn't say it but came to the conclusion that they would have to eject her before she hatched. The next day Takaya visits the maid café and asks Hatsuna out on a date and she agrees to it, after Takaya leaves Murakami and Kana come in to tell Hatsuna and the rest of the Astronomy Club that she is going to hatch the next day, when she is told this she bursts into tears. On the night of that same day Hatsuna goes over to Takaya's house to tell him that she isn't able to make it to their date the next day. Once she is walking back to the astronomy club from Takaya's house she runs in to him (By now Murakami has explained about witches to Takaya) and he confesses to her. After this happens, Hatsuna hatches because of her emotional state than Hexenjagd and the Astronomy Club show up. Kana them attempts to talk to Hatsuna because she saw Rurumi do so when she hatched, they then find out that Hatsuna won't be able to talk until she eats more people from Miki. Once this is said they get Hatsuna to eat her old body and after hearing and seeing this Takaya lets Hatsuna eat part of his body in an attempt to allow Hatsuna to respond to his confession. After attempting to eat Kazumi and failing she looks at the ground to see the now dying Takaya and comes back to her senses screaming because of what she did, Takaya than goes on to ask for Hatsuna's answer of his confession and she says she will go out with him. Hatsuna than tells everyone else to kill her before she isn't herself again, a few seconds after saying this she loses herself and attempts to eat Murakami, while she is lifting him up the top part of her head explodes by Makina. After a brief talk with Makina they find her Drasil is still alive and she is able to heal herself and Takaya.

Hatsuna's introduction is slightly different in the anime adaption; instead of being one of the B ranked witches who escaped at the start of the series, she was a A rank that was a part of the group of witches sent with Valkyria in order to capture Kotori Takatori. She is killed in a similar fashion as in the manga, being sliced in half, causing her beacon to fall off. Hatsuna then travels to the observatory and joins up with Ryouta's group, with the events being roughly the same as they occurred in the manga, the exceptions being minor for the most part (for example, she obtains her pills by taking them from her dead companions in the anime rather than stealing them from a crashed truck at the start of the manga).

Hatsuna's ability is that of regeneration; she is capable of regenerating her body, or the body of others, from otherwise fatal injuries. She first demonstrates this ability in chapter 60, where she effortlessly regenerates her body after Mako Fujisaki sliced it in half. She continues to demonstrate this ability throughout the manga, and her regeneration is so potent that not even being reduced to just her feet is enough to kill her.

Hatsuna also possesses the ability to heal the wounds of others, saving the life of both Ryouta Murakami, who had a large portion of his side blown out by Mako, and Kazumi Schlierenzauer, who was decapitated by Mako. However, this results in her melting as if her Harnessed had been ejected, but she just expands a lot of her energy and hangs up rather than dying.

The old observatory with the Astronomy Club.

Hatsuna as seen in the cover of Volume 8 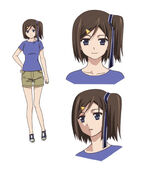 Hatsuna as seen in the anime opening

Hatsuna stole Ryouta's first kiss
Add a photo to this gallery
Retrieved from "https://gokukoku-no-brynhildr.fandom.com/wiki/Hatsuna_Wakabayashi?oldid=9819"
Community content is available under CC-BY-SA unless otherwise noted.