Kana Tachibana (橘 佳奈, Tachibana Kana?) is one of the main protagonists of Gokukoku no Brynhildr. She is the mascot of the Astronomy Club. She is a ranked B Magician. Her research no. is 4010.

Kana has blonde hair with twin drill tails at the side of her hair, with short hair at the back, and red eyes. She is mostly seen in a gothic lolita dress and headwear. Kana is noticeably smaller than most of her friends and classmates.

She is overall a kind and caring girl, although she can be quite mouthy and rude especially towards people she is not close with.  She is also willing to endure much to protect her friends, proven by her choice to lose her power of foresight in order to save Neko. Kana even attempted to kill Valkyria, one of the most powerful Magician's in the series, in order to save Neko and Ryouta. She seems to be a good judge of character, easily noticing Kazumi's perverted intentions, Ryouta's crush on Neko, and Neko's crush on Ryouta as well.

Kana is a magic user who escaped with Kuroha Neko at the beginning of the story. In the process of becoming a magician she became paralyzed when they implanted her "harnessed". She can only drink and move her left hand. She can't speak but uses a device which synthesizes the voice.

She initially lives with Kuroha Neko in an old house near the observatory. The two move to the observatory when Neko unintentionally burns the house down.

Kana trains her body and her killing instinct in chapters 104 and 105. Flashbacks show that Vingulf gave her the rank of C and, considering her useless, wished to execute her. Neko, however, destroyed the wall separating the execution room from the rest of the facility, refusing to allow her to be executed. Though Neko is harshly punished for her transgressions, Vingulf spares Kana.

Her power is foresight. She is limited to only seeing bizarre deaths that will occur in the near future. If nothing is done, the future she sees occurs 100%, but that future can be changed. Her powers are mainly used to prevent the deaths of the Astronomy Club members.

Kana gains the ability to move normally after the third button on her Harnessed is pushed, but loses her powers of precognition. The many years she spent paralyzed has also caused her body to atrophy, causing her to be significantly weaker than someone her own age would normally be. Realizing that she cannot protect anyone in her current state, Kana begins training to use a knife and honing her killing instinct.

In chapter 112, Kana has a foresight when placed in a life and death situation. Said foresight in longer and more precise compared to her previous visions. Like Mizuka, Kana is capable of moving around independently of her physical body when she experiences her visions. 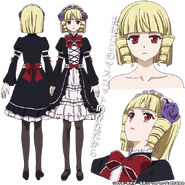 Kana's character entry in BD material.
Add a photo to this gallery
Retrieved from "https://gokukoku-no-brynhildr.fandom.com/wiki/Kana_Tachibana?oldid=9812"
Community content is available under CC-BY-SA unless otherwise noted.