Kazumi Schlierenzauer (カズミ=シュリーレンツァウアー) is a witch and one of the main protagonists of Brynhildr in the Darkness. Her research number is 2670. She is a member of the Astronomy Club.

Kazumi has short pink hair and blue eyes. Her most notable feature is her flat chest.

Her school uniform consists of a black dress with a white overtop that covers her shoulders and neck, it is decorated with blue lines and a purple bow. The ruffles are fastened to the bottom of her dress and she wears knee high black socks and shoes.

During her time off from school Kazumi wears little more than a camisole and hotpants.

Kazumi appears to suffer from a number of psychological issues which are likely caused by the years of imprisonment and experimentation at Vingulf.

When introduced, Kazumi was the same as other magicians - desperately looking for medicine in order to survive. While she initially appears to be selfish, demanding no less than half of the medicine that Neko Kuroha and Ryouta Murakami obtain during their break-in of a Dresden Pharmaceutical Factory, Kazumi softens up significantly as she bonds with the other members of the Astronomy Club, going so far as to split her last pill with Kana Tachibana in order to ensure that they both survive.

Kazumi appears to be a strong individual that is rarely phased. However, Kazumi is a fragile young woman that bottles up her own feelings and despairs in private, using her strong outside facade to try to cope with her feelings. Though she immediately plays it off as an act, Kazumi mentions that she has always been afraid and that she has always wanted to cry in front of someone. [1]

Kazumi is extremely sexually aggressive, especially towards Ryouta, attempting to push him into having sex with her on multiple occasions. Because she finds it difficult to express her feelings, this sexual aggression is part of how she expresses her feelings towards Ryouta. Though not as violent as Neko, Kazumi occasionally becomes jealous of other girls that approach Ryouta. Her feelings for Ryouta are further expanded as she admits later to herself that she really wants his child, as living proof of her existence.

Her small breast size is a touchy subject for her, and she has been known to express jealously towards girls with bigger busts or get extremely violent toward men (mainly Ryouta) that point it out. Kazumi also seems to have a foot fetish as she loves to show off her feet to others and she has actually pinched Ryouta on his cheek using her toes. She can also be seen often within the observatory with her shoes and socks removed as she rests on a bench.

Kazumi escapes with the other witches at the beginning of the series. Using her magic, she assists other witches enroll in the school in exchange for medicine.

She is first introduced in chapter 6 when Ryouta, Kuroha and Kana discuss their plan to break into Dresden Drug Manufacturing to secure more of the medicine. She asks a steep price of half the medicine they find in exchange for her help. Later it is revealed that Kazumi herself had run out of her own stash of medicine though she gave up half of her last pill to save Kana from dying. She then joins the Astronomy Club.

Like the other girls, Kazumi is a magician but her powers are focused on working with computers (technopathy).

She is able to break into any security system as her abilities allow her to do prime factor decomposition's, allowing her to decipher the encryption key with ease as she claims. The encryption key formed by 1024 bits nearly takes several decades to break even using several super computers but Kazumi is able to pull off this feat in mere seconds all by herself.

Three other magicians were also helped into getting into school thanks to her abilities, though all 3 of them were killed when Vingulf deployed the rank AA magic user Kikako. During the fight against Kikako she remains aware of the situation using the camera's within the park to see. Furthermore, she closes all entrances in order to keep people out.

During the search for Nanami she again makes use of the camera network in order to track down Nanami and direct the others to her position.

Requiring the assistance of a Magician with the power of technopathy in order to track down Ichijiku Chisato, Hexenjagd approaches Kazumi in chapter 79. When she accepts, Kazumi is pitted against Freya, a rank AAA with the same abilities. While Miki is initially skeptical and dismissive about Kazumi's chance against a rank AAA, Kazumi shocks her when she easily breaks through Freya's firewall. Kazumi explains that she purposely did poorly when The Organization ran their tests on her because she did not want to be involved in their plans. As such, Kazumi's ranking is not indicative of her true abilities, which surpasses even that of a rank AAA.

Ryouta - Kazumi develops feelings for Ryouta and often teases him with her body. Later on, her feelings toward him turns to love. She wishes to take his virginity and bear his child. At the start of summer vacation, she kisses Ryouta. Awhile later, walking together with him under a grove of trees. She asks if Ryouta had a girl he likes, him responding with a girl he loves, Kuroneko. After learning about her a bit, she notes her similarities with Neko, but Ryouta claims that Neko does not have the three moles. After finding the three moles of Kuroneko on Neko, Kazumi is devastated, thinking to herself about how she should tell Ryouta and how she was willing to die with mutual affection between them. Learning that only one of the could live, Kazumi goes outside, thinking that she could easily steal the medicine from Neko, the guard, but calls herself foolish as she would lose something of more valuable than her own life if she did that. She then thinks back to the time that Ryouta told her that he was willing to do anything for Kuroneko if she was still alive. She believes that Ryouta would let Neko live even if it meant the others dying. When Ryouta discovered the moles that Neko had, she became frustrated.

Neko Kuroha - Both of them are rivals for Ryouta's affection. Both girls have feelings for Ryouta, causing frequent friction and frustration between the two, although Neko was never actually aware of her own feelings. Neko also gets annoyed by Kazumi when she harasses Kana. Nonetheless, they are both good friends. After hearing from Ryouta about Kuroneko, her three moles, and Neko's alikeness, she returns to the observatory and strips down Neko under the guise of hot weather. She immediately identifies the marks on her breast, muttering that she thought she saw them before and leaves, completely devastated as Neko calls out to her about her sudden change in attitude. After Neko loses her memories, Kazumi informs her of many different things, but also the fact the she and Ryouta have kissed and are dating despite the latter being false. Kazumi had told the lie to her friend as she believed that she and Ryouta shouldn't have to suffer along with Neko due to her memory loss. Overhearing Ryouta's decision during Loki's massive attack, Kazumi realized she can't compare to Neko and performs an selfless act of love to prevent Ryouta from getting eating and entrusts Neko to take care of him.

Hatsuna Wakabayashi - Already friends from back at the lab. When Hatsuna joins the Astronomy Club, Kazumi (even Neko) immediately became jealous of Hatsuna getting Ryouta's attention. Kazumi is reminded by Hatsuna not to recklessly embarrass Neko as it will cause her to subconsciously unleash her power then make damage. In a changed of event, Kazumi now pressures Hatsuna into a relationship with Takaya. 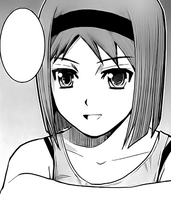 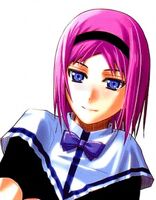 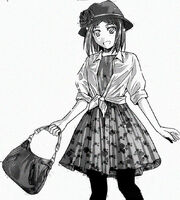 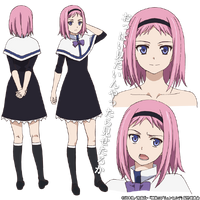 Kazumi as appearing in the Anime

Kazumi as appearing in the Manga

Kazumi as appearing in the Opening 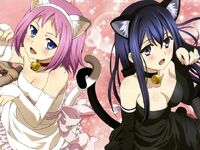 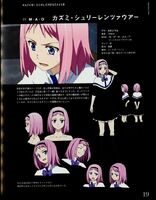 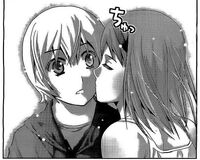 Retrieved from "https://gokukoku-no-brynhildr.fandom.com/wiki/Kazumi_Schlierenzauer?oldid=9853"
Community content is available under CC-BY-SA unless otherwise noted.