Start a Wiki
Kotori Takatori (鷹鳥 小鳥, Takatori Kotori?) is one of the main protagonists of Brynhildr In The Darkness (Manga).

Her lab number is 1107. She is a member of the Astronomy Club.

Kotori is a magician that escaped with the other magic users and found a place to live with her friend and fellow magic user name Chie. Due to running out of medicine and wanting Kotori to experience her own birthday, Chie sacrificed her life so that Kotori could survive.

She first joins the astronomy club where her actions seem to be very hostile. However it is later proven that she is in fact a very kind and timid girl who always tries to put on a smile despite the situations in memory of her friend Chie.

Though timid and easily embarrassed, she is also friendly and willing to help others and her friends when she needs to. Much like Neko Kuroha, she is even willing to sacrifice her own life if it meant she could protect the life of someone else such as against her battle with Kikako and subsequently trying to hide herself away so that she could die and not risk using the medicine that others could have. It is only through the motivations of Neko and Ryouta that she allows herself the will to live again and continue on.

Kotori had a desire for drawing, often doodling during school work and drawing vague love scenes, something that Kazumi embarrassing called her out on.

It is later discovered that Vingulf is after her, apparently being a person of incredible danger that could potentially destroy the world if she isn't caught. She is revealed to be the incubator for "Grane," a special variation of the Drassil that will wipe out all live on Earth should it hatch.

Kotori is a beautiful young girl with light brown hair, green eyes, and large breasts. She wears a white dress shirt with a red color and blue ribbon attached to it, a green skirt, and brown shoes.

Kotori has a sweet and innocent demeanor, but is also a klutz; she loves to eat food, hates studying; preferring to draw instead. She is also a hopeless romantic. Kotori is very passive; everyone thought that when she first realized that everyone in the astronomy club is a magician except for Ryouta Murakami, and did not understand the pressure felt of Kazumi's confession of her liking Ryouta and declaring it to Neko.

Just before the death of her close friend, Chie, she made a promise to the dying girl that she would always smile, no matter how sad she became. This makes it difficult to tell how she really feels at times, and is part of the reason why Kana suspected Kotori of being a Vingulf assassin.

Switching Places through Teleportation : Kotori has the ability to switch places with one other person that is directly in her line of sight. The down fall is that after using her ability her "harnessed" will then hang up. Despite only being able to use her ability once, before hanging up, her ability has often been useful in vital situations. This power can also reset kinetic energy, as proven when Murakami falls after trying to save Hatsuna.

Ain Soph Aur : Also known as "The Light That Rules Over Life" is Kotori's hidden power which can only be used when the consciousness inside her "harnessed" is released, is a light that is capable of destroying all life on the entire planet once is fully covers the planet, it works by fusing the cells of all living things together at the same time.

Magic Dispelling : This power can only be used by the special entity called the "Grane" inside her "harnessed," it dispels all powers of magicians completely, preventing them from being used even if they haven't hung up. It is so powerful in fact it keeps working even if the "Grane" is dead. 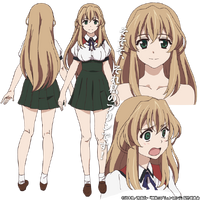 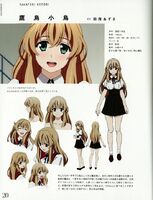 Biggest busts around Ryouta, know their appeals.
Retrieved from "https://gokukoku-no-brynhildr.fandom.com/wiki/Kotori_Takatori?oldid=9821"
Community content is available under CC-BY-SA unless otherwise noted.