Long is one of the supporting characters in Brynhildr in the Darkness. He is a member of Hexenjagd, a group resisting The Organization. He first appears in chapter 72, with the objective of capturing number 1107, Kotori Takatori.

Long is a tall man. He has long blonde hair, circle glasses, and is wearing what appears to be a priest's robe with a symbol on its chest and a black hat.

Long makes his first appearance in chapter 72, where he and Hexenjagd enter the observatory with the intention of capturing Kotori. Using a member whom is capable of nullifying magic, they confront Ichijiku Chisato and Mako Fujisaki, announcing that they would take Kotori from them. However, Ichijiku shoots the member nullifying the magic, allowing Mako the chance to teleport herself, Ichijiku and Kotori away. After Miki explains the truth about witches to Ryouta Murakami, he and the other members take their leave. 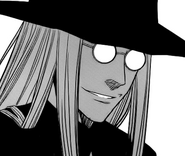 Appearance in the manga.

Long as briefly seen in the opening of the anime.

Long as seen in the twelfth episode of the anime.
Add a photo to this gallery
Retrieved from "https://gokukoku-no-brynhildr.fandom.com/wiki/Long?oldid=9385"
Community content is available under CC-BY-SA unless otherwise noted.