Start a Wiki
Nanami Tokou (斗光 奈波, Tokuo Nanami?) is a unique AA+ rank magician and former Antagonist. She is one of the magicians who has a tragic ending. Her laboratory number is 5210.

Nanami has periwinkle colored hair tied into two pig-tails with black laces, and blue eyes. She has also a pretty well-developed body, which she often uses to lure the attention from people around to make easier use her abilities on them and later to prostitute herself in front of brainwashed Kurofuku to get money from him (before erasing his memory again). Nanami normally wears a simple black-white dress along with frilly sleeves on her arms.

From chapter 160, Nanami starts appearing under guise of new girl named Aphrodite. As Aphrodite, Nanami keeps her blue eyes, however her hair changes to dark blue with a long length that reaches down to her hips, visually not so dissimilar from those of Neko's. Her overall appearance also looks much more girlier and even more emphasize her already pretty large breasts. In terms of clothes she wears a normal unmodified school uniform with a sweater. Is not so hard to guess that Nanami wanted to be more appealing to Ryouta as Aphrodite.

Nanami is cold and hostile at first, but she is soft-spoken and especially love sweets and cakes. Being experimented on by the Vingulf for possibly years, she has shown naivety towards the real world, such as enjoying sweets and cakes, not knowing the worth of money as she had thought ten dollars would be a lot of money. Nanami is also willing to give up her money to a little boy, despite not knowing him, which displays her act of kindness.

Nanami was a Magician from the facility and was Number 5210 who was sent to find Kuroha and friends and retrieve them. She had tried to erase the memories of Ryouta and felt sorry afterwards, though she did not know it hadn't really affected him and he was acting it out. Sometime later Nanami becomes friends with the group and was happy to have her first friends. The facility had noticed she did not fulfil her task and they ejected her "harnessed" which ended up killing her. When she died, she erased all the memories of her from everyone except Ryouta as she knew they would be sad if she died and she wanted them to always be happy. She left a part of her inside Ryouta as she has fragments of information she wants to give him.

She is mentioned in chapter 134 by Kurofuku. He attacks Kazumi, Hatsuna and Kana, reasoning that they must die because Nanami and Mizuka's death would be wasted otherwise. She makes another appearance in chapter 164, revealing herself to be the new girl going by Aphrodite, who is killed by an illusion of Makina. Murakami mourns her death at first, but eventually realizes that the girl was really Nanami playing a trick on him. She offers to reveal further information on Vingulf so that Murakami can rescue Kuroha Neko. In addition, she reveals that Murakami's ability to remember everything will cause him to die once he reaches his maximum capacity. In order to save his life, Nanami erases her existence, which had been taking up a large amount of capacity, marking her true and complete death.

Nanami has only shown the ability of reading people's memories and erasing memories of individuals when looking at them in the eyes, and modifying or overwriting memories. It is an advanced ability though this does not work against people wearing any kind of glasses. It is also said in the manga that she has a hidden ability, which is most probably remaining in someone's memories even after death.

She can also manifest memories as tangible illusions, such as her appearance as Aphrodite and Ryouta's memory of Makina. 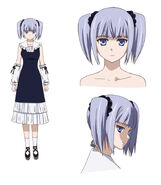 Nanami appearing in the ending of episode 10

Nanami in the manga

Nanami as Aphrodite gets more girlier than she expected.
Add a photo to this gallery
Retrieved from "https://gokukoku-no-brynhildr.fandom.com/wiki/Nanami_Tokou?oldid=9638"
Community content is available under CC-BY-SA unless otherwise noted.