Risa Kashiwagi (柏木 リサ, Kashiwagi Risa?) is a classmate of Ryouta Murakami, and Neko Kuroha's friend. As the story goes on, she starts to learn that Neko Kuroha has some kind of superpower.

When Neko Kuroha transfers, Risa and the rest of the class are astound of Ryouta's reaction to Neko and asking her to show her armpits, since Ryouta is usually someone who is ignorant to females. During swimming class, Risa's knee gets caught in an opened filter unable to breathe air. Suffocating, Risa almost drowns when Neko clogs the filter pipe with her powers freeing Risa (as Kana predicted Risa will die that day, the other being Ryouta).

Risa later then invites Neko to Karaoke with some friends. She notices Neko is a little clueless about romance when asks why her heart beats touching a boy's hand. Neko sings along, though Risa and others note how Neko has an odd taste in music.

In Chapter 104, as a new semester begins, Risa is excited to see Neko (unaware that Neko has lost all her memory), and Kazumi purposely re-acquaintances the duo.

After Neko openly confess that she'll try to know Ryouta better; although, he unwittingly admits of going out with Kazumi, Risa can tell that Neko is the one Ryouta likes, recalling how he immediately turned his attention on her from the beginning. When Risa finds Neko and wanting to know how she feels then discovers her blasting the ground out of frustration. While visiting her grandmother who is bedridden, she remembers the time when she almost drowned believing it could have been Neko who has superpowers and saved her. At that moment, Risa saw Ryouta walking with Kazumi then tells her mother to stop the car when suddenly they crash into a truck. Risa's mother gets out safely but Risa is left burning alive despite Ryouta's attempt to rescue then the Magicians proceed and Hatsuna using her ability to heal Risa not to attract a large audience.

Fully recovered in a hospital, Risa joins the school trip to Ishigaki Island. Sitting beside Kazumi on the airplane she interrogates if Neko has superpowers. Though Kazumi pretends to know nothing, Risa realize from her reaction that Neko does indeed have strange powers but decides not question it any further. She also sees the Astronomy Club members all freak out when hearing about the announcement of alien discovery in the United States.

Risa watches a protest rally being terrorized by Hrist on TV, remarking how her powers are similar to Neko. 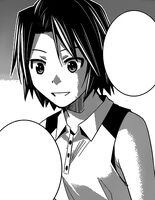 Risa Kashiwagi in the manga.

Ryouta Murakami – Risa's classmate. She admires Ryouta for being a top student in school even though he is cold and distant to females. She can tell that Ryouta really likes Neko.

Neko Kuroha – Risa's classmate. Finding Neko rather strange she is willing to become her friend, such as inviting her to karaoke. As the series progresses, Risa discovers Neko is a witch.

Kazumi Schlierenzauer – Risa's classmate. She figures out that Kazumi is aware of Neko's mysterious power and hears they are comrades.

Retrieved from "https://gokukoku-no-brynhildr.fandom.com/wiki/Risa_Kashiwagi?oldid=9751"
Community content is available under CC-BY-SA unless otherwise noted.