Start a Wiki
Saori (沙織, Saori?) was the first magician antagonist. She was a hybrid, capable of using 2 different forms of magic, introduced in episode 3 of the anime and chapter 6 of the manga. Her lab number was 6001. She is ranked AA.

In episodes 3 and 4 (chapters 8 and 9) , Murakami and Kuroha, infiltrated the Dresden Pharmaceutical Factory in order to obtain more pills. With the help of Kazumi hacking into the factory's systems and a forecast of the future by Kana specifying that (in the first forecast) Kuroha will be killed by Saori (second forecast - Murakami gets killed). After they have successfully infiltrated, Saori catches on to them and engages in a fight against Kuroha (knowing she doesn't stand a chance against an AA ranked witch). As Kuroha constantly avoids her slashing magic, she starts to get tired while at the same time, Murakami goes after Kuroha, attempting to stop her. In the end, Kuroha gets cornered, then killed, enraging Murakami to get a steel pipe and pierces Saori's heart. Murakami then tells Saori to reverse time. Reluctantly she does, after which, she hangs up, giving Murakami and Kuroha the chance to capture her. She is tied up and mentally creates a plan of how she can escape and kill them (while Murakami offers his help to free her). The HQ notices her stationary movements and ejects the beacon attached to her Harnessed. She dies and an alien emerges. Freaked out, Murakami steps on it.

Facial Features - Saori has golden eyes revolving around the pupil and alternates in pattern (dark-golden to yellow, then back to dark-golden). Her hair has a chin-length hair with a purple-ish colour to it.  She has a very unique hairstyle where the right side of her hair covers the right side of her face, stopping at the chin. At the end of each hair strand, it starts to get spiky. This continues all the way around her neck.

Clothing - Saori wears a green "one piece swimsuit" with a navy blue line running down from the center of the neck staright down between 2 white lines. She also wears a neck protector with 2 bolts at the front of the neck. She also wears black knee-high socks.

She is a AA rank magician. She has two magic abilities:

Slashing : She can cut up anything within a 6 meter radius.

Time Manipulation : She can turn back time by just one minute. After doing so, she will hang up.

Saori in the manga. 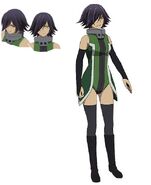 Time Control
Add a photo to this gallery
Retrieved from "https://gokukoku-no-brynhildr.fandom.com/wiki/Saori?oldid=9550"
Community content is available under CC-BY-SA unless otherwise noted.