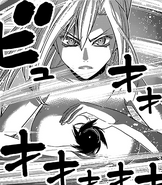 Add a photo to this gallery

The Valkyria is the highest rank among all of the magicians classified by Vingulf. They can use up to 8 types of magic powers. Due to their immense powers, Vingulf always restrains them. After Mako Fujisaki's defeat, Hrist awakens and is confirmed as the new Valkyria. Neko Kuroha was a Valkyria, but she lost her powers. Despite this, during her fight with Mako, Neko regains her powers as a Valkyria. After her battle with Mako, Neko lost her powers again. Near the end of the series, Neko regains her powers once more. Almost all of the Valkyria are shown to be able to create antimatter.

Retrieved from "https://gokukoku-no-brynhildr.fandom.com/wiki/Valkyria?oldid=8994"
Community content is available under CC-BY-SA unless otherwise noted.